The video talks of the digital conference DIGICROP 2020 are now online. Over 800 participants have already registered for our conference and we are looking forward to welcoming you all on the official website now as well as on Nov 10 at our live event. If you haven’t registered yet do so until Nov 8 at: https://digicrop.de/registration/

Want to know how DIGICROP works? Check out our welcome video!

The whole series can be found here: 5 Minutes with Cyrill.

The whole series can be found here: 5 Minutes with Cyrill.

All videos of my “5 Minutes with Cyrill” series can be found here on our website.

Over the last decade, the demand for autonomous mobile robots has been growing continuously. Applications range from mobile manipulators operating on factory floors to autonomous cars driving in urban environments. A common requirement for all these tasks is the capability to autonomously navigate by making sequences of decisions in environments that are complex, dynamic, and uncertain. Robots are often deployed in environments populated by humans or other moving objects and require to perform safe and compliant behaviors for navigation. Furthermore, real-world scenarios are typically characterized by uncertainty in the robot’s perception, action execution, and belief about the world. Traditional approaches to robot navigation plan and follow the shortest path on static geometric representations of the environment. Such systems are often not adequate to capture the characteristics of real-world environments and may lead robots to perform behaviors that are sub-optimal in practice.
In this thesis, we address robot navigation in different real-world scenarios and investigate a set of approaches that go beyond planning the shortest paths. We present solutions for robot navigation that are able to take into account and reason about the situation in which the robot navigates, the dynamics populating the environment, and the uncertainty about the world by exploiting available background knowledge. For example, we use publicly available maps of urban environments to planning policies for performing robust navigation on road net- works under position uncertainty. Whereas, we exploit the paths experienced by the robot during navigation to generate safe and predictable behaviors that meet the user’s preferences. We also present solutions for navigating in partially unknown environments by actively gathering information and by exploiting this knowledge to automatically improve robot navigation over time. We use the onboard robot perception during navigation in outdoor environments to automatically discover paths along which the impact of detrimental factors due to the terrain is lower. Furthermore, we exploit the observations about the traversability changes in an environment to plan anticipatory behaviors that lead the robot to encounter a reduced number of unforeseen obstacles while navigating.

The current COVID-19 situation is difficult for all of us. In order to allow you to attend as many courses as possible and complete your study plan with minimum delays, we will try hard and will offer all courses in an online fashion.

Our plan is to make all lectures that will be taught in the summer term 2020 available as video lectures on YouTube. In addition to that, we will have question sessions via a live video conferencing system with the lecturer and the same for the tutorials. This might not be the perfect setup but the closest thing we can do to teaching in the lecture room.

We will start our video lecture early and aim at making all the material available in the beginning of April 2020 on our website. This will allow you to start taking our classes around the original schedule of the term and thus during a time when most of you will have to stay at home. We will be flexible w.r.t. the submission date for homework assignments.

This will affect all our courses, for the summer term 2020, this will:

The Master project course will be done using 1:1 supervision with regular live video supervision and will probably be a bit more structured compared to previous years. All in all, we will try to do our best to allow you to study your mandatory and elective courses with our lab in the summer term 2020.

All the best and stay healthy,
Cyrill Stachniss

On January 17, Philipp Lottes and Cyrill Stachniss have founded the Pheno-Inspect GmbH, a startup providing new solutions for the sensor-based analysis of individual plants and whole fields. 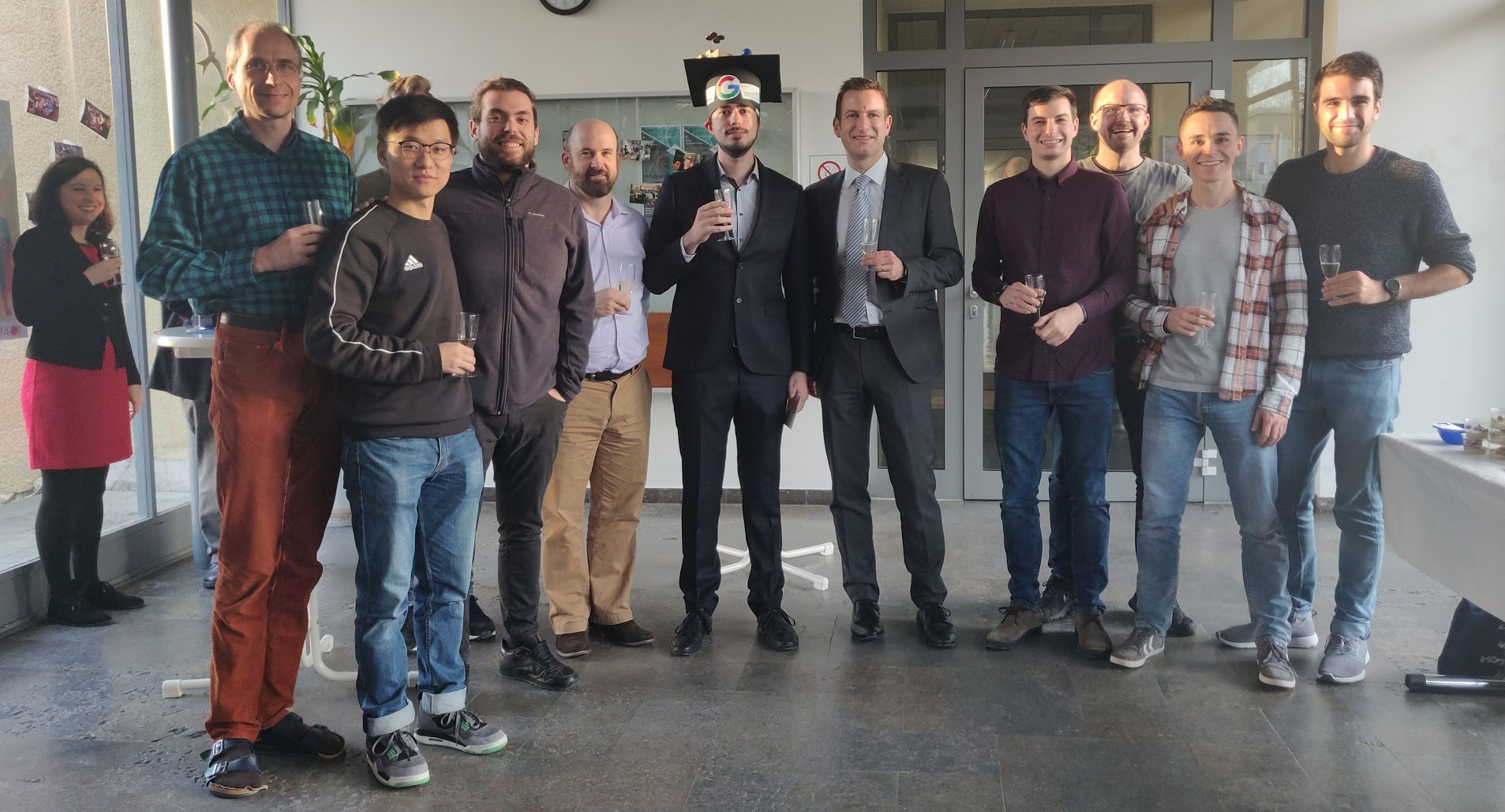 Mapping the environment with the purpose of building a 3D model that represents it, is traditionally achieved by trained personnel, using measuring equipment such as cameras or terrestrial laser scanners. This process is often expensive and time-consuming. The use of a robotic platform for such a purpose can simplify the process and enables the use of 3D models for consumer applications or in environments inaccessible to human operators. However, fully autonomous 3D reconstruction is a complex task and it is the focus of several open research topics.
In this thesis, we try to address some of the open problems in active 3D environment reconstruction. For solving such a task, a robot should autonomously determine the best positions to record measurements and integrate these measurements in a model while exploring the environment. In this thesis, we first address the task of integrating the measurements from a sensor in real-time into a dense 3D model. Second, we focus on \emph{where} the sensor should be placed to explore an unknown environment by recording the necessary measurements as efficiently as possible. Third, we relax the assumption of a static environment, which is typically made in active 3D reconstruction. Specifically, we target long-term changes in the environment and we address the issue of how to identify them online with an exploring robot, to integrate them in an existing 3D model. Finally, we address the problem of identifying and dealing with dynamic elements in the environment, while recording the measurements.

In the first part of this thesis, we assume the environment to be static and we solve the first two problems. We propose an approach to 3D reconstruction in real-time using a consumer RGB-D sensor. A particular focus of our approach is its efficiency in terms of both execution time and memory consumption. Moreover, our method is particularly robust to situations where the structural cues are insufficient. Additionally, we propose an approach to compute iteratively the next best viewpoint for the sensor to maximize the information obtained from the measurements. Our algorithm is taylored for micro aerial vehicles (MAV) and takes into account the specific limitations that this kind of robots have.

In the second part of this work, we focus on non-static environments and we address the last two problems. We deal with long-term changes by proposing an approach that is able to identify the regions that changed on a 3D model, from a short sequence of images. Our method is fast enough to be suitable to run online on a mapping robot, which can direct its effort on the parts of the environment that have changed. Finally, we address the problem of mapping fully dynamic environments, by proposing an online 3D reconstruction approach that is able to identify and filter out dynamic elements in the measurements.

In sum, this thesis makes several contributions in the context of robotic map building and dealing with change. Compared to the current state of the art, the approaches presented in this thesis allow for a more robust real-time tracking of RGB-D sensors including the ability to deal with dynamic scenes. Moreover, this work provides a new, more efficient view point selection technique for MAV exploration, and an efficient online change detection approach operating on 3D models from images that is substantially faster than comparable existing methods. Thus, we advanced the state of the art in the field with respect to robustness as well as efficiency.