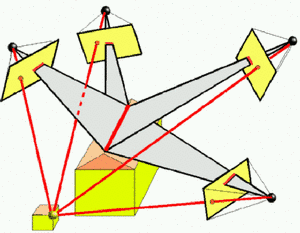 such as Computer Vision and Computer Graphics to handle geometrical structures and relations in images and 3D space. Using the so-called Grassmann-Cayley algebra, one can find nice algebraic bilinear expressions for geometric tasks such as the intersection of a line and a plane in 3D, tests of geometric relations or camera projection of 3D points and lines.

However it is not clear how to include notions of uncertainty into the algebraic expressions for projective geometry tasks. SUGR attempts to model uncertainty by the second moments of the homogeneous parameter vectors. Usually we expect the user to know the covariance vector of a point in 3D or 2D or maybe the covariance vector of a line in 2D. For all subsequent constructions from these entities we can do error propagation which is sufficently accurate for practical cases.

With the proposed uncertainty model, one can do direct construction, construction by minimizationq and statistical tests with reasonable results as long as the errors are small as in most real-world applications.